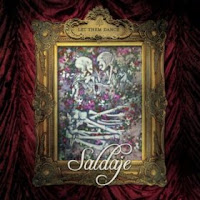 Saldaje is Melonie Steffes and Shaun Anchak, a duo described by one writer as “the darkest ukulele band in Northern Michigan”, and who take their name from a “Portuguese expression of intense, often nostalgic longing”. Within those two quotes is a lot of information, and more than enough clues to provide some sort of impression of what Steffes and Anchak are about before one’s even heard their record.

“Let Them Dance” is, as far as I can ascertain, their debut release, and it fulfills expectations. Influenced primarily by the European folk tradition, the duo contemporizes and deviates their style through original songs, the addition of non-folk instruments, and a healthy respect for artists like Tom Waits and Nick Cave.

They set the mood beautifully with the acapella “Rusalka”. Steffes’ voice rings out uncluttered and pure, and leads into “Blossoms” where gypsy jazz and Middle Eastern strains combine with ukulele strums and dark tales of love and betrayal. The mood is shadowy and mysterious throughout, and song titles like “Fingernails”, “Skeletons” and “Absinthe” are hugely evocative, and all three satisfy. The latter providing a distinct highlight, a mesmeric melody captivates, and both players shine.
www.saldaje.com
www.facebook.com/Saldaje
www.reverbnation.com/saldaje
Tony S.