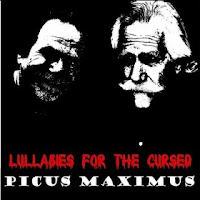 San Diego-based duo Rick Sparhawk and Jim Soldi have musical histories that go back to the 1970s. Sparhawk originally found recognition as a founding member of bluegrass pranksters Montezuma's Revenge, and played venues such as Nashville’s Grand Ol’ Opry and the Palomino Club in West Hollywood. Soldi was a much in demand guitarist for a host of country legends, including Johnny Cash, Ricky Skaggs and Waylon Jennings, and even enjoyed a short stint in Brooke Shields’ band. I thing it’s fair to say that both have paid their dues.

In Picus Maximus they’re joined by various other acclaimed local California musicians, though it’s very much Sparhawk’s and Soldi’s show, and for their second LP (they released the rock opera “The Tragedy of Johnny Patriot” in 2008) they’ve make use of all their varied experience. “Lullabies For The Cursed” isn’t a rock opera, but it’s certainly conceptual. It’s a tribute to vintage monster movies, and features a cast of ghosts, ghouls, vamps and hostile aliens, the characters that inhabit the shadows at midnight screenings and have a tendency to jump out at the most inopportune moments.

Within the band’s Zappa-esque, bluesy Americana sound, there’s an atmosphere of cultivated dread, though it’ll inevitably raise smiles rather that the hairs on the back of the neck. Still, lots of fun for next year’s Halloween, and the songs are more than strong enough to be enjoyed whenever the fancy arises. Standout tracks include: the heavy-rocking “New World Order”, the blues-noir of “When the Moon Goes to Shinin'”, the New Orleans(y) “Vampire's Kiss” and the terrific ‘50s sci-fi groove of “Alien Probe”.
www.facebook.com/Picus-Maximus
www.picusmaximus.com
Phil S.