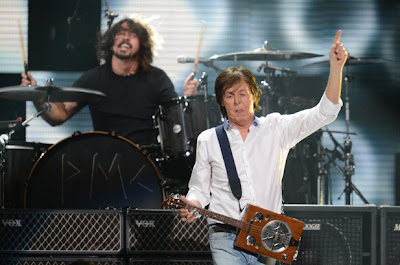 The storm caused the deaths of 120 people when it hit the Caribbean and US in October.

After the show, Grohl spoke about teaming up with Sir Paul for the new track Cut Me Some Slack.

"We wanted to do a new song, so we wrote and recorded a new song in a day and it's heavy as..."

The concert was also streamed online, aired on radio and was shown in theatres worldwide, raising more than $30m (£18.6m) for the Robin Hood Foundation in ticket sales alone.

Celebrities including Kristen Stewart, Whoopi Goldberg and Danny Devito were also on hand to take donations during the telethon.

The night of collaborations was started with Bruce Springsteen inviting Jon Bon Jovi on stage to perform Born To Run, repaying the favour later to sing Who Says You Can't Go Home.

Martin said: "I know you really wanted One Direction, but it's way past their bedtime. That's why you get one-quarter of Coldplay."

When the Rolling Stones took to the stage, performing You've Got Me Rockin and Jumping Jack Flash, Mick Jagger commented: "This has got to be the largest collection of old English musicians ever assembled in Madison Square Garden. If it rains in London, you've got to come and help us."

The Who performed Quadrophenia track Bellboy, with a video of the late Keith Moon singing on it, and other tracks including See Me Feel Me, Pinball Wizard and Baba O'Riley.

The star-studded benefit show was closed by Alicia Keys singing her hometown anthem Empire State of Mind at 1:19am after the show went on for nearly six hours.

Damage caused by the superstorm which hit the East Coast of the US in late October has been put at $82bn (£50.8).

The death toll has been placed at 120, after the storm carved a path through the Caribbean later hitting New York and its surrounding areas, leaving millions without heat or electricity.