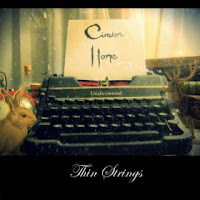 Gabriel Cotrell and Calvin Garber began Cinder Home simply as a way of having fun and playing a little music. As with many good ideas, things progressed expeditiously; songs were written, other musicians recruited, and Cinder Home was born. Taking their prompts from artists such as Old Crow Medicine Show and Mumford & Sons, their mix of alternative folk, bluegrass and older string band influences adds an earthy, unaffected aspect to a roots genre that can often sound a little sterile and over polished. There’s an authenticity to Cinder Home’s sound that is wholly persuasive.

It’s very much an album to turn on and sink into. All five musicians blend beautifully, and while some tracks do standout, the overall quality of the material is so high, it feels almost boorish highlighting individual songs. Still, that won’t stop me; the opening title track nails the sound straight off. It’s yearning vocal and boy/girl harmonies are something they repeatedly return to, and why not? It’s utterly convincing and ever so engaging. “We're Young” raises the tempo, and is incredibly catchy. “Have You Forgotten” follows it, and if you can imagine The Men They Couldn’t Hang transferred to Appalachia, you’ll have some idea of how good it is. Perhaps my favourite is “I've Won”; the vocals, the song, the playing all come together in a manner that is classic and timeless. It’s difficult to believe that they’ve only been around since September 2011.
www.facebook.com/CinderHome
www.cinderhome.bandcamp.com
Phil S.