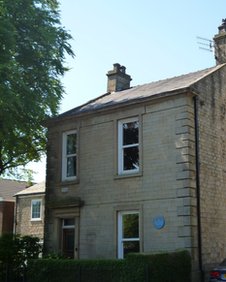 A house in Greater Manchester where the artist L S Lowry spent the last 28 years of his life has been granted listed building status.

The Elms, a private house in Mottram-in-Longdendale, has been awarded Grade II status.

Lowry, who died in 1976 aged 85, used the dining room of the semi-detached property as his studio.

It is the second of Lowry's residences to be listed, his house in Swinton was listed in 1981.

The Department for Culture Media and Sport (DCMS) said the house was "identified as possessing significant architectural and historical interest".

Nick Bridgland, of English Heritage, said: "Lowry's work is closely associated with ordinary life in the north of England and his house, traditional and modest, echoes the subject matter of his work.

"We recommended the house for listing as it was his home and working environment for 28 years."

Some biographers state that the artist found the house "ugly and uncomfortable".

Stretford-born Lowry worked full-time for his whole life as a clerk and continued to be chief cashier at the Pall Mall Property Company in Manchester, even when he was one of the most popular painters in Britain.

The artist worked on his paintings steadily for many years and only achieved success when he was in his 60s.