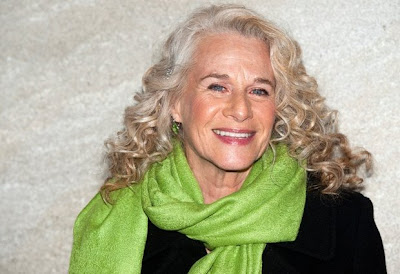 Singer-songwriter Carole King is to be awarded the Gershwin Prize for Popular Song, the Library of Congress has announced.

The 70-year-old is the first woman to win the award, which honours lifetime achievement in popular music.

King is best known for penning hit songs such as Aretha Franklin's (You Make Me Feel Like) A Natural Woman and You've Got a Friend by James Taylor.

She will receive her award at a ceremony in Washington in the spring.

The Library of Congress praised King's work for being able to "communicate universal human emotions like love, joy and pain".

The Grammy winner co-wrote her first number one hit in 1960 aged 17 with Will You Love Me Tomorrow, recorded by The Shirelles.

Written with her then-husband Gerry Goffin, the pair went on to pen hits including Take Good Care of My Baby, The Loco-Motion and Pleasant Valley Sunday.

As a solo artist, King became the first female solo artist to sell more than 10 million copies of a single album with her 1971 release Tapestry.

It topped the chart for 15 weeks and spawned hits I Feel The Earth Move, It's Too Late and So Far Away.

"I was so pleased when the venerable Library of Congress began honouring writers of popular songs with the Gershwin Prize," King said in a statement.

"I'm proud to be the fifth such honouree and the first woman among such distinguished company."

Past recipients of the award include Paul Simon, Stevie Wonder, Paul McCartney and songwriting duo Burt Bacharach and Hal David.