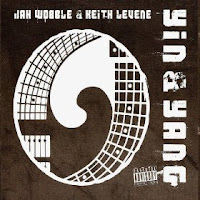 Fresh from touring their own retrospective take on ‘Metal Box’, former PiL stalwarts Wobble and Levine have resisted the temptation to default to the post-punk template; and in ‘Yin and Yang’, have rather produced a uniquely eclectic but satisfyingly progressive set of new material.

Fittingly, vocals are largely incidental. Wobble’s spoken (or growled) word passages grace the Blockheads-on-acid-esque title track and the edgy ‘Jags and Staffs’; but even guests vocalists Little Annie and Nathan Maverick self-consciously avoid anything like singing in their contributions to ‘Vampires’ and ‘Understand’ respectively. Instead, voices are mere supplements to a rich and varied sonic landscape which draws from familiar and less familiar world/jazz/kraut/electronica/industrial sources, spiked with a surprising dash of country (‘Mississippi’) and filtered through Wobble’s trademark nuanced dub. A bewildering take on ‘Within You Without You’ adds colours to the psychedelic pallet its original writer could barely have imagined and is worth hearing for its audacity alone.

If there seem to be standouts they come late in the day and may be as much to do with gathering momentum as quality differential. Instrumental ‘Fluid’ is just what it says on the tin, ‘Vampires’ is short but exquisite; and the two parts of ‘Understand’ are a madcap delight. But the collection as a whole is intelligent, brave, and (given how flawed and over-rated the old guvnor’s latest effort was), timely too.

Wobble has been one of the UK’s most consistently creative mavericks for the past thirty-five years, and reunited here with his old sparring partner has produced a gem of a record which will delight long-term advocates and connect with new recruits as well.
www.cherryred.co.uk
Neil B.