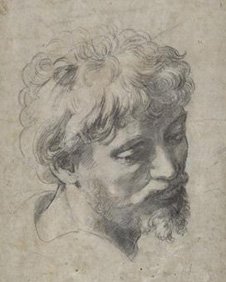 A Raphael sketch has fetched £29.7m at auction in London, setting a record price for any drawing in art history.

The small-scale Head of an Apostle prompted seventeen minutes of frenzied bidding at Sotheby's on Wednesday, almost doubling pre-sale estimates.

The 1519 chalk drawing, a study for Raphael's Transfiguration, was part of a private collection held at Chatsworth House, home of the Duke of Devonshire.

Fluctuating exchange rates suggest the Christie's drawing narrowly beat Head of an Apostle in dollar terms, but since both were sold in pounds, in London, Sotheby's is claiming a record.

"If you are lucky, at some point in your career a work like this comes along," said Gregory Rubinstein, head of old master drawings at Sotheby's.

"A number of the world's greatest collectors stepped up tonight in recognition of the genius of Raphael and the extraordinary beauty of this drawing, with its exceptional provenance."

The Chatsworth House collection comprises about 3,000 old master drawings in total, including works by Rubens, Van Dyck and Rembrandt.

The Duke previously said the sale of the Raphael drawing, one of 14 he owns, will benefit the long-term future of Chatsworth and its collections.

The 15 inch by 11 inch (38 cm by 28 cm) Head of an Apostle is one of only three drawings of this calibre to have appeared at auction in the last 50 years.

Raphael's Transfiguration, which hangs in Rome's Vatican Museum, is considered one of the Italian painter's greatest Renaissance works.