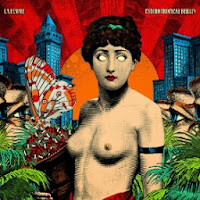 “Psycho Tropical Berlin” is the debut from La Femme, who formed in Biarritz around the nucleus of Sacha Got’s keyboards and Marlon Magnée’s guitars. The line-up has expanded since the first EP of 2010 to include Sam Lefevre (bass), Noé Delmas (drums), Clémence Quélennec (vocals), Clara Luciani, Jane Peynot and Marilou Chollet. The title for the album quite perfectly captures the essence of the album: upbeat electro-psychedelic pop, with Krautrock and new-wave tendencies, with a splash of surf rock.

“Antitaxi” (a pro – bus diatribe) liaises between the angular anguish of Joy Division and the absurdist end of Devo. From thereon Quélennec’s lead gives inherent 1960s yé-yé zeal to the energetic grooves. Featured singles include the Bardot / Gainsbourg flavoured "Hypsoline", the propulsive, "Packshot", and the funky fairground pop of "Nous Etions Deux" - some nice videos for which can be found on YouTube.

Other highlights are the cool “Interlude” which is as vintage as it is widescreen, and the amazing centrepiece, “It’s Time to Wake Up 2023”, crosses Laurie Anderson’s repetitive “O Superman” motif with a Velvets / Modern Lovers two-chord organ mantra, before the electric sitar joins in.

An enthusiastic, vibrant LP, which I’d recommend to those that enjoy Django Django, or French contemporaries, Concrete Knives.
www.bornbadrecords.net
Willsk