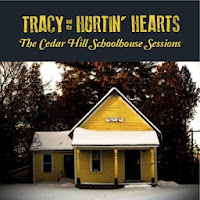 From Woodstock, New Brunswick, Tracy and the Hurtin’ Heart’s second release is an ambitious project, which includes video as well as music. Indeed, every one of the four tracks on their “Cedar Hill Schoolhouse Sessions” EP has corresponding ‘live’ visuals, all of which can be found on the group’s YouTube channel – well worth checking out.

Recorded at one of the oldest surviving schoolhouses in their home province, singer-songwriter Tracy Anderson has fashioned a collection of songs that sound as mature and aged as their studio. Lead track “All Gone” digs deep into history, with a collection of hard-luck tales, both fiscal and personal. It’s structured beautifully, with the best verse saved for last, and is the sort of song that deserves serious attention from roots radio.

“I Still See Us Together” and “Barebones” cement Anderson’s reputation for narrative, and the latter track includes a series of keyboard runs that inflect a jazz element. It’s a pleasing effect, and leads us into the final song, the magnificent “If I Was A Painter” – sublime blend of old country and folksong. The squeak on the guitar strings helps emphasize the homeliness of the recording process, and Anderson’s sweet, melodic voice carries the songs ever upwards. All in all, the perfect finale to an eminently likeable collection.
www.tracyandthehurtinhearts.com
www.facebook.com/Tracy-and-the-Hurtin-Hearts
www.tracyandthehurtinhearts.bandcamp.com
Phil S.

Tracy and the Hurtin’ Hearts (feat. Jens Jeppsen) – All Gone