Review: Caterpillars – The Other Side

Caterpillars – The Other Side (Independent) 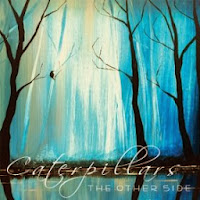 Dallas band, Caterpillars are creating a considerable buzz with their new “The Other Side” LP. Indeed, various publications have commended it, including the much respected AbsolutePunk site, which described the record as “one of the most exciting albums of 2013”. That’s high praise indeed, though it only takes a few spins of “The Other Side” to understand the sentiments. Their take on contemporary alternative rock is emotionally mature with heavy emphasis placed on melodic progression. The result is exhilarating and rewarding, and singer-songwriter Christopher Robinson fully understands the balance between passion and control.

He’s ably supported by the other members of the band, Drew Black, Carson Brooks and Ben Love, and between them they move between intense, angular riffs and dreamy, contemplative passages. It’s always involving and accessible, and songs like opener “Winter Haiku” and “Light in This Room” delicately bridge the different aspects of their music, while building to euphoric conclusions. The tumultuous “Rebirth” stumbles gloriously, repeatedly pulling itself together for further assaults on various summits, and the title track displays a gentleness that tugs at the heartstrings. The quartet brings the album to a close with “The Foundation”, a fiery, desperate paean to dashed hopes, and quite possibly the best song to be found on the collection.
www.caterpillarstx.com
www.facebook.com/Caterpillarss
www.caterpillars.bandcamp.com
Caterpillars CD Baby Page
Phil S.