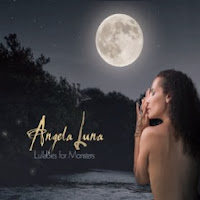 Goodness, there’s something incredibly appealing about Angela Luna. On her fourth solo outing, the singer-songwriter, who splits her time between Hartford, Connecticut and Venice, California, has delivered a collection of new songs that plays to all her strengths. Performance-wise, she earned her spurs playing with a variety of groups and artists, including Jamie Strange, Evil Beetles, Jet Black Jane, Ramon and the Monster, and currently, Klokwize. There’s plenty of musical diversity amongst those names – from alt. rock and pop to hip-hop - and Luna takes a little from all of them, but it’s her own sound and style that’s stamped indelibly all over “Lullabies For Monsters”, and it’s that, and her own self-belief, which allows her to experiment, and take her music along new and interesting paths.

The album begins with “Twice as Less”, and it’s soulful and sweet, with elements of country and pop vying for position. A strong track to start with and, with a little luck, should attract serious attention from radio. Current single “Breeze” is a heartfelt ballad, which is by no means representative of the album, but confirms her talents as both a singer and writer. The hits keep on coming: “Sri-Lanka”, featuring Klokwize and Billy Harvey mixes rock and hip-hop influences, “Kalimba Blues” might be the best vocal on the album, though it’s far too short, and final cut “Dizzy” is striking, soul drenched pop, produced by the legendary Bob Gaudio of Four Seasons fame.
www.facebook.com/angelalunamusic
www.reverbnation.com/angelaluna
Angela Luna CD Baby Page
Phil S.