Review: Damon – Song of a Gypsy

Damon – Song of a Gypsy (Independent) 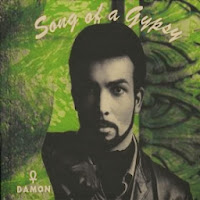 And so the story goes… the direction of Damon’s music was formed whilst jamming with George Harrison and Ravi Shankar in Big Sur, California in 1967. Those resounding ethnic waves instilled an omnipresent influence on his guitar playing and his soon after released, critically unrecognised (because of the small, 100 copy, pressing) and subsequently forgotten debut album, “Song of a Gypsy.”

In collectors circles original copies have been rumoured to exchange hands for up to $3000, which may be Damon’s impetus to get a belated self-re-release. Unfortunately, first impressions suggest it’s not quite as exceptional as its high price tag would allow.

It opens strongly enough with the title track, yet from thereon it lacks much in the way of variation, with the midway exception of “Funky Funk Blues”. Damon’s crystal and precise musings of hippy waywardness dominate but, never the less, there’s enough modal-fuzz guitar, eastern finger cymbals and percussion to hold its own. The woozy “Birds Fly So High” and the mildly Electric Prunes-ish, “Oh What a Good Boy Am I” are the album’s highlights.

Beware: if you visit Damon’s website and watch some of his YouTube postings it may be enough to put you off completely!
www.damonthegypsy.com
Willsk