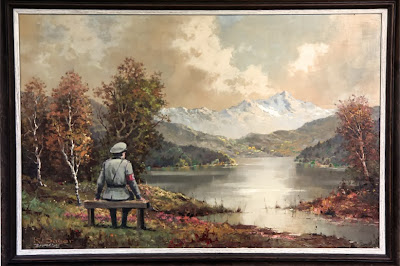 British graffiti artist Banksy has reworked an oil painting he bought from a charity shop in New York, before returning it for an auction.

The online auction is set to raise hundreds of thousands of dollars.

"It could go for as high as a million dollars or even higher because there's so much buzz about," said Elizabeth von Habsburg, managing director at the art appraisal firm Winston Art Group.

The painting, which is currently hanging above a sofa in the front window of the shop on New York's East 23rd Street, has received mostly positive reactions according to staff.

The mountain scene features a bench, onto which Banksy has painted a Nazi officer admiring the view.

"I'm just happy it's going to our cause regardless of the image," said Archer Brady who works in the shop. 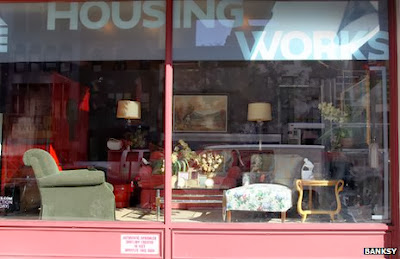 Banksy, who has remained anonymous since appearing on the art scene in 1993, has spent October in residence in New York unveiling a new piece of art each day, as part of his Better In Than Out series.

They have popped up in unexpected locations across the city, ranging from stencilled rats on a Brooklyn wall to statues of McDonald's mascot Ronald McDonald getting a shoe shine in the Bronx.

Earlier this week, the artist also posted an article on his website calling the design of the World Trade Center a disaster.

His artwork has previously sold for as much as $1.87 million (£1.17m), according to Sotheby's auction house.