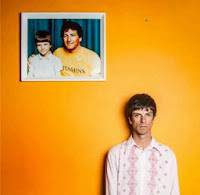 Former Gorky’s Zygotic Mynci frontman, Euros Childs has an otherworldly quality and musical style that’s totally his own. For “Situation Comedy” he doesn’t disappoint, producing an album which is as witty and charming as it is slightly oddball and elfin. His ninth solo LP since Gorky’s end in 2006, the album moves away from the synth, in favour of a wholesome piano-pop sound.

Overall the tracks are pretty theatrical but no more so than “Give The Girl a Hand – The Peanut Vendor” and the inclusion of flute on tracks like “Tina Said” and “Good Time Baby (Talk To Me)” add a touch of the folk whimsy, for which Childs is admired.

The lyrics often carry a grey undertone with his acutely observational lyrics approaching subjects of self-dissatisfaction, Welsh landscapes spoilt by second homeowners and sexual deviance. In contrast the LP’s musical tone is quite buoyant, with the exception of “Brides In The Bath” which, to an unsettling melody, a madcap tale of murder by drowning is recounted.

“Trick of The Mind” is certainly just that, leading from a sparse and sombre intro via just a few well chosen lyrics, into fairytale enchantment: an utterly mesmerising conclusion.