Naked artist nails himself to Red Square in protest 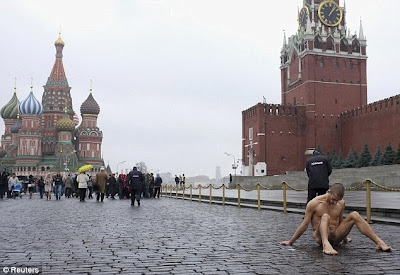 A performance artist has been detained in Moscow after stripping naked and nailing his scrotum to the cobblestones of Red Square in a protest.

Pyotr Pavlensky, 29, reportedly sat for an hour and a half on the square on Sunday afternoon, with a nail driven through his genitals into the ground.

The St Petersburg performer had faced a custodial sentence of 15 days but was freed on Monday.

Pavlensky said his "Fixation" act was a metaphor for apathy in Russia.

Critics of Russian President Vladimir Putin accuse him of presiding over a crackdown on dissent since his re-election in March last year.

Timing his act to coincide with Police Day, Pavlensky said in a statement: "When the authorities turn the country into one big prison, openly robbing the populace and channelling funds to increase and enrich the police and other security agencies, society accepts arbitrariness and, having forgotten its advantage in numbers, brings the triumph of the police state closer through its inaction."

His graphic act outside the Lenin Mausoleum was recorded on video which was put online before being blocked by leading social media, the Russian news website grani.ru reports. Clips continued to appear on Monday.

A judge who examined his case on Monday ruled that the documents had been incorrectly presented, Russian news website TV Rain reports. It was not immediately clear if he would be re-arrested.

Pavlensky previously attracted attention by sewing his lips together in July of last year and demonstrating outside St Petersburg's Kazan Cathedral in support of the imprisoned Pussy Riot protesters. In May of this year, he wrapped his naked body in a "cocoon" of barbed wire outside the city's parliament.

Fellow figures from the Russian arts world praised his Red Square act in comments on grani.ru, with one calling it a "powerful gesture of absolute despair" and another, "a manifesto of powerlessness".

Others asked how security forces patrolling Red Square could have allowed Pavlensky to get away with his performance so long. One blogger quipped on Twitter: "The artist Pavlensky nails micro-bloggers to his testicles".