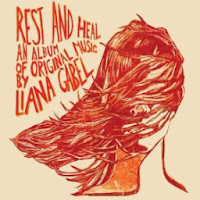 From Rochester, NY, Liana Gabel has been singing for as far back as she can remember. She picked up a guitar for the first time when she was 16, began writing her own songs almost immediately, and studied classical voice for two years at the State University of New York. A further course in jazz studies has helped shape both her singing and writing, and “Rest And Heal” is her second full-length collection of original songs.

Thanks to her musical education and her own idiosyncratic talent, Gabel possesses a sound and style that’s truly impossible to pin down. If forced to express an opinion on possible influences, my list would include names like Joanna Newsom, Kate Bush, Regina Spector and Rickie Lee Jones, but without hearing Gabel sing her songs, simple comparisons don’t really work.

Though she’s also steeped in the singer-songwriter tradition, “Rest And Heal” is very much a full band production. Apart from Gabel there are no less than nine other musicians and vocalists credited, and the range of instrumentation is equally impressive, from violin, saxophone and piano to flugelhorn and mellophone (looks like a big trumpet, but sounds like a French Horn).

Fortunately, her songs remain at the centre of the arrangements, whichever instruments are employed. The album begins with the title track and one of her best; it arrives on spartan piano, with just Gabel’s arresting voice carrying the melody, before quickly evolving into a full band number, with brass and strings adding powerful emphasis to the words. On “Big Sur” Gabel is joined on vocals by Natalie Ryan, and the shuffling, jazzy rhythm is wonderfully engaging - and final cut, “Another Place Another Time”, stretches and flexes its musical muscle, and both Gabel and her musicians respond in kind. Great stuff.
www.lianagabel.com
www.facebook.com/Liana-Gabel
www.lianaband.bandcamp.com
Liana Gabel CD Baby Page
Phil S.