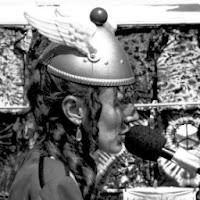 The Space Lady (aka Susan Dietrich) is a San Franciscan street performer who started out playing pop covers on her accordion in the late 1970s. Following the theft of her instrument, she upgraded to newer technology, in the shape of the Casio keyboard, then festooned herself in space travel paraphernalia and transmitted her strange messages of peace and harmony through to the 1990s.

She came into low-key cult status with her inclusion on Irwin Chusid's compilation of outsider music, “Songs In The Key Of Z” in 2000 - an album, which collected a host of strange, unconventional or mentally unstable artists.

Arguably the appeal of the outsider musician is the exponent’s insular musical vision, self-belief and compulsion to perform – often vying with accepted standards of taste and tolerance - that gives the music an unnerving, unsettling or mysterious edge, and perplexes their audience. The Space Lady sits (un)comfortably within this “genre”.

“The Space Lady's Greatest Hits” collects together her only recorded music from her 70s-90s career. What you get is bizarre, cabaret, lo-fi recordings of a quite intelligent and distinctive voice, atop sounds that are as simple as they are strange and arcane.

The self-penned “Humdinger” is a description of all that surrounds her, “Synthesize Me” sets selected lyrics to complement the space-age backdrop and Peter Schilling’s “Major Tom” is an apt choice of cover.

Other songs chosen, work in a more inexplicable manner. The cowboy classic, “Ghost Riders in the Sky” is totally haunting but conjures no horses, “Born to Be Wild” lacks the aggression and rock ’n’ roll of Steppenwolf’s original, but is wild. The Electric Prunes’ “I Had Too Much to Dream (Last Night)” is modulation crazy and “Ballroom Blitz” removes all traces of glam.

In 2012 The Space Lady revived her career, playing at the Riverwalk and on Union Street in Pueblo, CO, and at the UFO Museum and Research Center in Roswell, New Mexico and is now recording again. Her recordings have also appeared on mixes by Erol Alkan and John Maus.

“The Space Lady's Greatest Hits” is totally unique, as humorous as it is weird, and a mind-boggling curio.
www.nightschoolrecords.com
Willsk