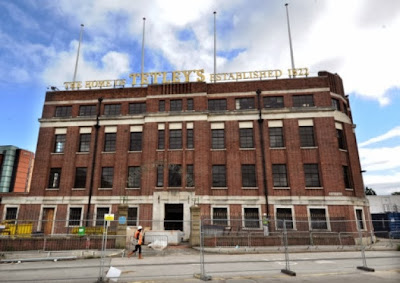 A new art gallery is opening in the headquarters of the former Tetley brewery in Leeds.

The gallery, named The Tetley, is officially launched on Thursday before being opened to the public on Friday.

The art deco building will also include a museum dedicated to the brewery, which closed in 2011 after 189 years.

The headquarters has undergone a £1.5m conversion and hopes to attract 45,000 people a year. The first exhibitions are on the theme of "a new reality".

Artist James Clarkson will create new work on site using objects he has found during the renovation. The other artists in the launch programme are Emma Rushton, Derek Tyman and Rehana Zaman.

The venue will host artists who have outgrown the city's grassroots galleries and are yet to step up to the Leeds Art Gallery and Henry Moore Institute.

The Tetley director Kerry Harker said it is not intending to compete with the £35m Hepworth gallery, which opened in 2011 in nearby Wakefield and attracts more established names.

"We're not trying to replicate anything the Hepworth has been doing," she said.

"This is a £1.5m project and it's on a more modest scale. It responds to the environment we're in now economically. We're not seeing any more of those big £35m capital projects at the moment."