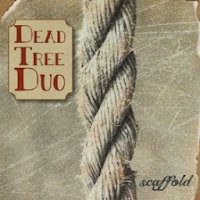 Dead Tree Duo is A.J Seidner on guitar, vocals and stomps, and Mark Ford, who also sings and plays cello. Together they play a form of folk music, which is full of sinister foreboding and portentous atmospheres. Of course, the cello often sounds mournful and melancholic, but on “Scaffold” it can only take partial credit, as Seinder’s ominous, almost menacing acoustic guitar, and the duo’s keening harmonies add considerably to the mood.

Based in Austin, Texas, they’re obviously bringing something new to their local scene, and on this evidence, they deserve to be heard much further afield. With a published list of influences that includes such disparate names as Tool, Hamell On Trial, The Civil Wars and Stravinsky, it’s no surprise they’re ploughing unfamiliar furrows, and hats off to the pair for coming up with a form that dares to be different.

Emotionally fraught, “Scaffold” takes the listener through a series of scenes and scenarios, which they’re invited to engage with on some basic level. Opening track “The Fugitive” is both stirring and thrilling. Ford’s cello maximizes the effect with sweeping bass strokes that simultaneously underpin and overpower. “Stuck in the Muck” is decidedly brighter in tone, though it’s hardly lightweight and Gaga weaned pop kids should probably avoid. “One Sin” gets the collection back on track, and “The Hanging Of Mary” and concluding gem “Sisyphus” confirm their outsider genius.
www.deadtreeduo.com
www.facebook.com/deadtreeduo
www.soundcloud.com/deadtreeduo
Dead Tree Duo CD Baby Page
Rob F.