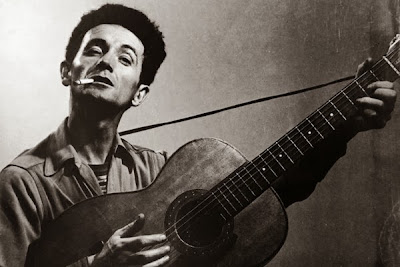 The debut novel from folk singer Woody Guthrie is up for 2013's Literary Review Bad Sex in Fiction Award, 46 years after his death.

Guthrie's House of Earth will battle novels including Susan Choi's My Education and Rupert Thomson's Secrecy.

The winner will be revealed during a ceremony in London on 3 December.

Judges revealed they "agonised" over a passage from Helen Fielding's new Bridget Jones: Mad about The Boy, but felt it did not make the cut.

An encounter between the famous singleton and an ex-army officer - "'Oh, oh,' I gasped. 'Did they teach you this in the SAS?'" - was deemed "not quite cringeworthy enough".

The full list of nominees features The Last Banquet by Jonathan Grimwood, Motherland by William Nicholson, Manil Suri's The City of Devi, The Victoria System by Eric Reinhardt and The World Was All Before Them by Matthew Reynolds.

Now in its 21st year, the award is to recognise the "most egregious passage of sexual description" in a novel.

Phrases such as "her body melted into a single note of music to the sky" have earned American singer Guthrie his posthumous nomination.

His newly-discovered novel was released earlier this year and featured an introduction from Johnny Depp.

Meanwhile Rupert Thompson's Secrecy - set in 17th-Century Italy - includes this passage:
"Mauve and yellow flowers filled the blank screen of my eyelids, the petals loosening and drifting downwards on to smooth grey stone. I kissed the soft bristles in the hollow of her armpit."

Last year the prize was won by Canadian author Nancy Huston for her book Infrared.

The literary magazine Literary Review said its purpose was "to draw attention to the crude, badly written, often perfunctory use of redundant passages of sexual description in the modern novel, and to discourage it."