The Texettes – Country RnR (Round Records) 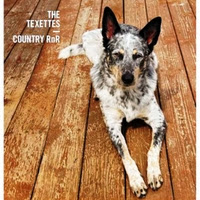 The Texettes started life in 2000, soon evolving into a five-piece, before slimming down again to core duo Terry Bradford and Helen Ellis – with studio help from various musical friends. The Adelaide pair have been performing, recording and releasing their music, almost from the off, and their homegrown take on country and roots music tends to avoid the majority of the genre’s clichés by centering Bradford’s lyrics on things they know about, i.e. love, loss, Australia and its environs, etc. - and keeping the production clean and simple.

Both Bradford and Ellis sing, the former with a voice, which shares an agreeable timbre with Gene Clark, while Ellis’ vocals ring out hearty and wholesome. It’s a good, natural mix, and goes some way to explain just why they win so many awards from various Australian country music associations. That, and of course, the quality of the songs.

“Country RnR” collects some of their best-known material, and the songs they present have won a plethora of awards and medals. Bradford’s a sharp lyricist with an ear for both narrative and hooks, and there’s evidence of both strewn across the 16 tracks.

They open with “The Land That We Love”, a love song to their native Australia, and a favourite with local DJs. The title track, a Dave Alvin style paean to the joys of radio, finds Ellis in fine vocal form, her warm tones instilling in the listener a peaceful, easy feeling – if you get my drift. “The Lady and the Tramp” is an upbeat floor-filler, with some fine picking, and “Big Girl Now” rolls along in like a classic ‘50s country number, as interpreted by Kirsty MacColl.
Texettes.com
www.facebook.com/TheTexettes
The Texettes CD Baby Page
Phil S.
Posted by Bangs at 11/04/2013 02:15:00 pm