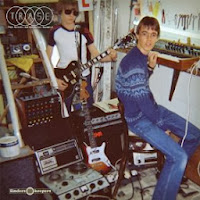 Andy Votel, as curator of Finders Keepers, digs into record crates as deep as he does wide, to source musical obscurities that are historically or culturally important, or just deserve a wider audience. The latest is “Tape Recorder And Synthesiser Ensemble” (or T.R.A.S.E.), a collection of recordings made by Andy Popplewell between 1981-3, when he was still a schoolboy. For those who don’t recognize the name, Popplewell later went on to work for the BBC as a sound effects man, before pursuing a career as a studio engineer and tape archivist.

In his home-recording career he completed just one album, “Electronic Rock” which existed as a sole personal C90 demo copy, and is the source of this release. Using a homemade synth (Chorosynth built from magazine diagrams), mixer and primitive drum machines, the solo performances (with only occasional guitar from his brother) were made as an extension to woodwork, metalwork and science classes and his interest in sound and lighting design for school plays.

The edgy synthesized soundtracks of John Carpenter informs the sound, as do German electronic pioneers like Kraftwerk and Harmonia (track “Harmonium” is quite a reference), together with the burgeoning synth pop acts of the early ‘80s (Ultravox, Gary Numan, et al).

Constructed with quiet disregard for musical rules and contemporary tastes, the output is varied, touching on the experimental (such as the abstract drum pattern etched at the back of “Harmonium”), electro-funky, and occasionally gothic. Slightly awkward vocals are added to tracks such as “Talk To Me”, “Unrequited Love” and his Numan cover, “We Are So Fragile”.
www.finderskeepersrecords.com
Willsk