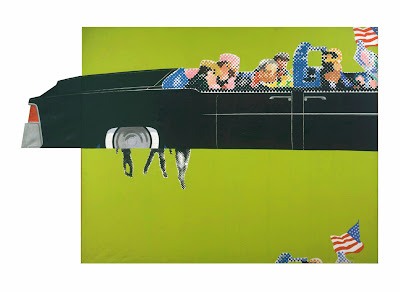 Lincoln Convertible, the only known contemporary painting of the assassination of John F Kennedy, has gone on display at Tate Britain.

Gerald Laing, who spent a large part of his life in the Highlands, created the artwork shortly after the shooting of the US president 50 years ago.

Laing's New York dealer refused to exhibit it and it was put in storage.

The pop artist, who was born in Newcastle-upon-Tyne, had been living on the Black Isle when he died in 2011.

He spent much of the 1960s working in New York and was a close friend of artists Andy Warhol and Roy Lichtenstein.

Lincoln Convertible was considered too controversial to be displayed so soon after Kennedy's death in Dallas 1963.

It was kept in storage for about 30 years before galleries felt comfortable enough to exhibit it.

Almost 3m (9.10ft) long, the painting is based on film footage of the assassination taken by Dallas resident Abraham Zapruder.

The painting - in which Laing used coloured dots for the first and only time in his career - depicts the Lincoln car in which the president and his wife had been travelling.

Jackie Kennedy can be seen in her pink pill-box hat, while her husband leans over having been shot.

The American flag is seen going off the screen to the right and below are the legs of secret service men running across the grass towards the car.

The bottom of the canvas shows in part an earlier frame of the film, where the head of the Kennedy's chauffeur and the American flag are visible.

The painting is owned by the artist's estate.

In October 2011, he showcased a series of paintings and drawings of Amy Winehouse in London.

Laing was also a sculptor and created a statue of Sherlock Holmes that stands in Edinburgh and also the Exiles, a statue at Helmsdale that recalls the Highland Clearances in Scotland.

Four Rugby Players at Twickenham Stadium, Ten Dragons at London's Bank Underground Station and The Glass Virgins at Standard Life's building in Edinburgh are among his other sculptures.

He settled in the Highlands and made 16th Century Kinkell Castle, near Inverness, his family's home.