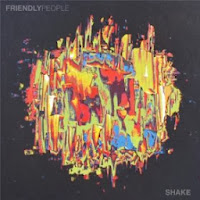 The members of Friendly People came together in the Boston winter of 2010/11, beginning as a loose jam session in a living room, and coming to some sort of conclusion with their debut album “Shake”. In-between they honed their craft, played a lot of shows, and recently toured nationally, earning a slot at this year’s South By Southwest Festival.

It’s no surprise a major breakthrough is on the cards; the Friendly People play an energized form of alt. rock, which sounds utterly contemporary, whilst incorporating all sorts of influences, including new folk, post-punk, Americana and progressive styles. When heard altogether the result is powerfully persuasive, complex yet natural, and remarkably approachable.

There are seven permanent members of the band, including two drummers, and on “Shake” they’re joined by another dozen musicians and vocalists. The sound is always full and detailed, yet they somehow avoid confusion or cluttering their songs with excess. Songwriter Pat McCusker (he also sings and strums an acoustic guitar) revels in revealing abstractions, taking the listener on lyrical flights, which are to be deciphered to give meaning.

His knack for the details is striking – on “Branches” there are some glorious lines and a memorable chorus, which is buoyed by swollen, swirling strings and things, before breaking like a high tide. Adventurous and daring, “Move” arrives on a slither of noise, overtaken almost immediately by an insistent beat and McCusker’s vocal. It builds beautifully, employing shades of early/mid period Talking Heads and fading into the six-minute “Maps”. A grand design of a song, in several parts, it thrills and confounds in equal measure.
www.friendlypeoplemusic.com
www.facebook.com/friendlypeoplemusic
www.friendlypeople.bandcamp.com
Friendly People CD Baby Page
Phil S.