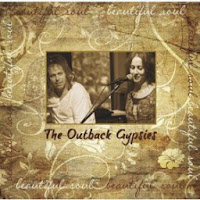 The Outback Gypsies call Denmark, Western Australia home, and are essentially the husband and wife duo, Andrea and Del Fisher. They’ve been performing together since the beginning of 2011, releasing their debut long player in 2012, together with a succession of singles. They play regularly in and around their home territory and earlier this year undertook a tour of the US west coast. Hopefully they’ll find their way to the UK sooner rather than later.

They’re christened their sound as “foleggae”, which doesn’t exactly roll off the tongue, yet does perfectly encapsulate what they do. Raised on the music (and ideals) of the ‘60s and ‘70s, they bring a sense of independence and freedom to their songs, together with a social conscience. Song titles like “Fly Free” and “Brothers in Life” give the game away, and apart from the Australian accents and occasional island rhythm, they wouldn’t sounded out of place amongst the Greenwich Village radicals during the folk boom, or the San Francisco hippies a decade later.

Both Andrea and Del sing and play guitar. Dual vocalists can often spoil the flow of an album, but not so here. There’s a chemistry to what they do and on tracks like “Sacred Woman” and the title track, though each take separate leads, the presence of the other can always be felt. Other highlights include “Another World” and their exquisite duet on the final track, “Holding Hands With an Angel”.
www.outbackgypsies.com
www.facebook.com/outbackgypsies
The Outback Gypsies CD Baby Page
Phil S.