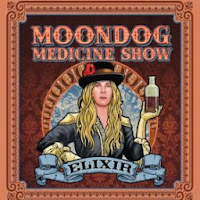 The inclusion of songs by Ike and Tina Turner (‘Cussin’, Cryin’ and Carryin’ On’) and Barrelhouse Annie (‘If It Don’t Fit Don’t Force It’) within a set of otherwise original tunes by guitarist Joel ‘Jomo’ Newman is a strong indication of where this outfit is coming from.

Fronted by Lana Spence’s gritty vocals, the band brew up a heady mix of funk, soul, blues and rock, augmented by keyboards, horns and backing singers a-plenty. The likelihood that this combination will bear more than a passing resemblance to the work of a certain Ms. Joplin hasn’t passed unnoticed, not least by Big Brother and the Holding Company’s Sam Andrews who has described their sound as ‘strong and defiant’ and says of Spence herself that ‘she always delivers’.

In fairness, on the evidence of ‘Elixir’, that’s a description which could well be applied to the whole band. No mere pretenders they have produced a collection that’s crisp and vibrant and consistently tight as a drum. The Ike and Tina cover is well judged – a real barnstormer which must seriously rock live – and Newman’s own ‘Moondog Elixir’, ‘Bombom’ and ‘Cold in Hand’ particularly impress from the first listen onwards.