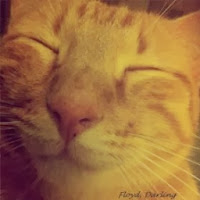 Austin, Texas duo, Floyd, Darling (Clem Darling – guitar, Floyd Colleps – drums and percussion) have emerged from their local indie-folk scene, with a short, but perfectly formed, debut album. Both Darling and Colleps sing well, their songs are pleasingly structured, with plenty of big, catchy pop moments, and considering the sparsity of instrumentation, the sound is full and complete.

There are eight songs in total and each one is chock full of lyrical flights. If words were money, they spend like millionaires, taking the listener on journeys through the pair’s thoughts, desires, dreams, etc. There are plenty of lines that raise a smile, and Darling’s guitar propels the words with some urgency. In fact, they’re usually in a hurry to move their songs long, as if they’ve so much to say and the tape’s threatening to run out. The effect isn’t unlike The Wedding Present in their prime, and they share the same ear for sweet melodic rushes, though they’re nowhere near as frantic.

They get things moving with “Disney Kind (F Is for F***)”, which explores lost love and comes in three distinct parts. It’s a strong opener, and they follow it with “Skinny Jeans”, the sort of indie-pop song that bands build careers on, and spend their summers playing on UK festival stages. Needless to say it’s had a few plays over the last week. Other highlights include “A Lake” where a languid vocal tells its tale over a firm (but gentle) guitar riff, and final track “News”, which slows the pace, and ups the melancholy, to fine effect.
www.facebook.com/Floyd-Darling
www.floyddarlingmusic.bandcamp.com
Floyd Darling CD Baby Page
Phil S.