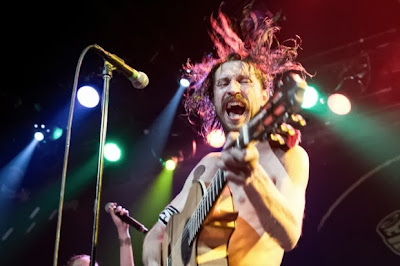 “Lost Innocent World” is featured on Gogol Bordello’s critically acclaimed new album PURA VIDA CONSPIRACY, out now on Casa Gogol/ATO Records.  With this new video, lead singer Eugene Hutz wanted to capture the essence of an old saying ‘every man has to go through his hell to get to his heaven.’  He elaborates by saying, “The hourglass here signifies that hell, where people are too busy living in the future or living in the past. Meanwhile, the actual and most alive part of life is indeed now. It really is yours for the taking, if you are interested in aliveness.”

The Los Angeles based Kolton Brothers grew up with a common interest in movies, music, and television with Ross exploring film while Grant focused on animation. Grant Kolton has been animating for roughly 10 years and worked with clients including Dave Matthews Band, HBO’s True Blood, Cage The Elephant, and My Morning Jacket. Ross Kolton has created productions for VICE, E! News, and DeathSquad and recently finished his own feature length film.
Gogol Bordello will bring their self-professed "volcano of music" on a run of UK dates in December: