Review: The Harmaleighs – People Line Up

The Harmaleighs – People Line Up (Independent) 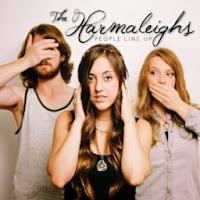 Nashville trio The Harmaleighs hit the ground running with their debut release, the five-track “People Line Up” - a lively, lyrical offering, which places them squarely in the new folk-rock scene, alongside bazillion-sellers such as the Mumfords and Fleet Foxes. Their unique selling points are the vibrant lead vocals of Haley Grant (who also writes the songs), their sublime harmonies and the often striking imagery, which they employ.

I can’t imagine it’s been too easy for them to make an impression on their local scene – Nashville has never had a reputation for making life easy for artists / groups who don’t tow the party line. Fortunately, if they can catch the breaks, there’s a worldwide audience waiting for them. The five songs they present for our delectation are universally strong, and Grant has a fine ear for a pop hook, and writes melodies that stick.

Roots radio should be all over them. Opening cut “Sunflowers” balances on a chugging banjo riff and is both gentle and assertive. It’s followed by the excellent “Freakshow” where a splash of indie attitude is incorporated and a scratchy mandolin adds plenty of colour. They end with “Monster in My Head”, a clever take on mental instability, with a gloom-laden cello in the background providing ominous tones.
www.facebook.com/TheHarmaleighs
www.reverbnation.com/theharmaleighs
The Harmaleighs CD Baby Page
Phil S.