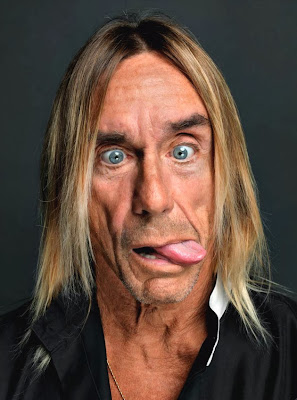 Iggy Pop is to present two shows this Christmas on BBC 6 Music.

The 66-year-old will host two shows as part of a festive line-up that includes Mick Jones and Paul Simonon of The Clash and Metallica's Lars Ulrich.

"To come up with the tunes that fit the concept of each show, I've had to dig back to things that I haven't heard in a long, long time," said Iggy.

"I thought I better check these old numbers to see if they still made the grade for me. They still do."

The Lust for Life singer, who released his first album with the Stooges for six years earlier this year, will present two programmes on the BBC digital station over the Christmas period.

Iggy Pop's first Show - on Christmas Day - is entitled Rockin' Rebels and will be followed by an interview with Metallica drummer Ulrich as part of Matt Everitt's The First Time strand.

A second Iggy show, on New Year's Day, will explore Heartbreak and Heartaches.

"I've listened to all this music for the shows and it all flows for me," said the veteran rocker, adding that he hoped to "reach out and touch" the listener.

The BBC said the shows would offer an "exclusive insight into the mind of one of the most influential rock stars of the last 40 years".

This is Radio Clash, a two-hour special presented by Jones and Simonon, will air on Boxing Day afternoon.