George Stubbs' kangaroo and dingo paintings to stay in UK 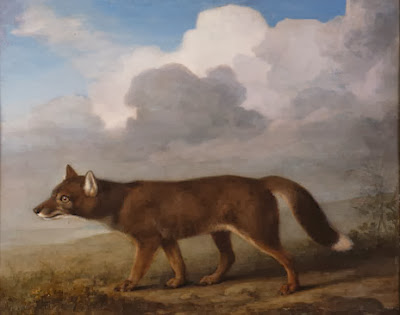 Two 18th century George Stubbs paintings, featuring a kangaroo and a dingo, are to stay in Britain after an appeal backed by David Attenborough.

A £1.5m donation from shipping magnate Eyal Ofer has enabled the National Maritime Museum to buy the paintings.

Commissioned after Captain James Cook's first Endeavour voyage, they were put under an export bar in January after being sold to a buyer outside the UK.

They are the first known depictions of the Australian animals in Western art.

Kongouro from New Holland and Portrait of a Large Dog were first exhibited together in London in 1773 and have remained in the UK ever since.

Stubbs used sketches and specimens to create the paintings in the UK.

Both paintings were privately owned until they were sold in late 2012, when they were put under an export bar because of their place in British history and artistic culture.

Attenborough, who backed the nationwide Save Our Stubbs appeal, said it was "exciting news that these two pictures, so important in the history of zoological discovery, are to remain where they were commissioned and painted".

A statement from the National Maritime Museum said it was "delighted" with the donation from the Eyal Ofer Family Foundation.

Contributions from the Heritage Lottery Fund, the Monument Trust, the Art Fund and the public also helped the museum to purchase the paintings, which it says will "greatly enhance" its permanent collection.

It already holds collections relating to Cook's three great voyages and these paintings will be central to a commemoration of the 250th anniversary of Cook's Endeavour voyage in 2018.

The works will initially go on display in the historic Queen's House, which is part of the National Maritime Museum in Greenwich, in summer 2014. The gallery space will be named The Eyal Ofer Gallery.

The shipping magnate has supported numerous projects including the new building programme at Tate Modern and the Royal Row Barge Gloriana for Her Majesty's the Queen's Diamond Jubilee.

"My family has a long connection with this great maritime institution and these paintings are a landmark in Britain's history of maritime exploration and Captain Cook's voyages," he said.

The export licence deferral was placed on the pictures in January by Culture Minister Ed Vaizey, who said it was "great news" that the "strange and wonderful paintings will be available to be enjoyed by everyone for generations to come".