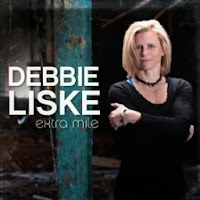 “Extra Mile” is Debbie Liske’s fourth album, and it’s a collection that’s picking up plaudits and acclaim wherever it’s heard. Yet it’s another side of Liske’s life which shapes and informs her songwriting and deserves just as much attention, and that’s her charity work. Over the years she’s raised money for cancer charities, played concerts to help finance literacy, environmental and wildlife projects, and as a member of the American Red Cross, she helped in the aftermath of Hurricane Sandy.

It’s only natural that her songs should reflect the concerns and issues that interest her, though she steadfastly avoids rhetoric or sermonizing. One title that instantly stands out on “Extra Mile” is “My Hurricane”, though it’s a song about addiction rather than her experiences post-Sandy - but it’s powerful stuff, all the same, with a hard-hitting video to accompany it.

Liske’s earlier records have been described as acousti-funk, and here she continues the trend, with vivid, literate, folk-based acoustic songs, blended with rhythms, which are altogether more primal. It transports “Extra Mile” (and her earlier records) away from standard singer-songwriter forms, and into new and interesting territory. Opening cut “Words Unspoken” rattles along at pace, with groovy, modern electronics taking the lead and Liske’s rhythm section head for the floor. “Shut My Mouth” is a classic pop song, with a chorus that doesn’t let go, and “Everybody Hurts” may share a title with REM, but the resulting song is considerably more upbeat.
DebbieLiske.com
Facebook.com/DebbieLiskeMusic
Debbie Liske's CD Baby Page
Phil S.