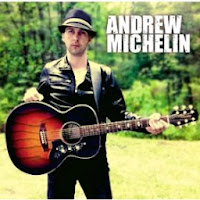 Andrew Michelin is a Canadian singer-songwriter who takes his inspiration from artists like Noel Gallagher and Tom Petty. His debut four-track EP is certainly steeped in the same melodic tradition which, of course, can be traced directly back to The Beatles, and helps make his songs accessible and radio friendly.

Recorded quite simply for maximum impact, the sparseness of the production and uncluttered arrangements force the listener to pay attention to the songs, and Michelin doesn’t disappoint. He understands both the importance of structure and the desirability of pop hooks, and repeatedly he delivers both.

Opening number “All My Life” sets the scene and declares his musical intentions from the off. Shimmering guitars add detail, but it’s Michelin and his song that take centre-stage, and the nature of his approach (and the aural pleasure that results) will remind some listeners of Elliott Smith circa “Figure 8”.

“Bellamy Trees” strips his sound back further to just vocals and heavily strummed acoustic guitar, and the performance is confident and defiant, while “Alright” is considerably lighter. The EP closes with “Everybody Wants to Be a Star”, and perhaps that’s the case with Michelin, though ultimately I suspect it’s his music and the desire to express himself, that takes priority.
www.facebook.com/AndrewMichelinMusic
www.reverbnation.com/andrewmichelin
Andrew Michelin CD Baby Page
Phil S.