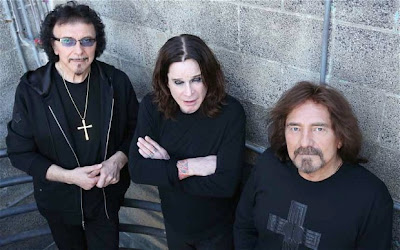 Black Sabbath triumphed at this year's Classic Rock Roll of Honour, picking up three prizes including the living legend award.

The Birmingham band also won album of the year for 13 and event of the year, after 13 topped album charts worldwide and scored them their biggest US hit.

Other winners announced at this year's London ceremony include Led Zeppelin, The Rolling Stones and Fleetwood Mac.

Following their Hyde Park live shows and a Glastonbury headline set this summer The Rolling Stones were named band of the year, while best new band went to The Temperance Movement.

Shep Gordon, manager of Alice Cooper for more than 40 years, was honoured with a special VIP Award.

The prize also recognises his work as a film producer and humanitarian, and how he has helped to sculpt the careers of a host of friends in the entertainment industry.

"And with the Temperance Movement and Virginmarys coming through there's still hope for the future of British rock too."

Now in their ninth year, the awards were handed out during a ceremony at Camden's Roundhouse, hosted by former Marillion frontman Fish.

Five of the categories were voted for by readers including re-issue of the year, which was won by Fleetwood Mac's 35th anniversary edition of Rumours, and film of the year won by Led Zeppelin's Celebration Day.

Readers also decided the winners of best new band, album of the year and band of the year.

Mott the Hoople were honoured with the outstanding contribution award, while Wilko Johnson won the innovator.