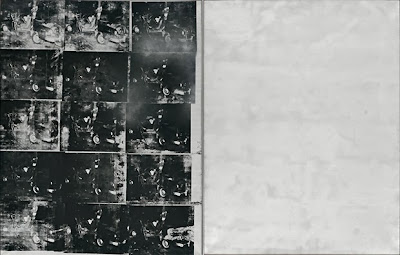 Silver Car Crash (Double Disaster) depicts the aftermath of an accident, with a twisted body sprawled across the mangled interior of a vehicle.

It is one of four double-panel car crash paintings that Warhol created in 1963. The others are all in museums.

Silver Car Crash has previously been owned by collectors such as Charles Saatchi, Thomas Ammann, as well as German multi-millionaire playboy Gunter Sachs.

Five bidders went as high as $80m (£50m), said auctioneer Tobias Meyer. Sotheby's did not identify the winner, who placed their bid by telephone.

"It's a great price - and completely worth it," said Meyer. "It's the best painting I've ever sold in my whole career."

The price was the second-highest in history for a contemporary work of art - the highest being the $142.4m (£88.7m) fetched by Francis Bacon's Three Studies of Lucian Freud earlier this week at Christie's.

Warhol's record-breaking work used images appropriated from newspapers, which he then silk-screened onto canvas, using reflective silver paint, repeating the scene many times over. The second panel in the 8-by-13 foot work is a blank canvas of silver.

"It's the monumentality of the image that is so powerful," said Mr Meyer. "It's as if life and death come straight at you."

Wednesday evening's auction of post-war and contemporary art made a grand total of $380.6m (£237.1m), Sotheby's highest total ever, with auction records set by artists such as Cy Twombly and Brice Marden.

According to the New York Times, the floor was packed with prominent collectors such as hedge fund manager Daniel S Loeb, Hollywood agent Michael Ovitz, and Miami collectors Don and Mera Rubbell.

The blockbuster sale came a day after Christie's sale of contemporary art brought in more than $691.5m (£430.8m), the highest total for any single auction in history.

Officials at both auction houses say the recent price spikes have been driven by wealthy collectors entering what is an increasingly global market.

"When the quality is there, multiple people from different cultural backgrounds are going for it, because it's outstanding."

Buyers from Russia, Asia, the Middle East and Latin America all participated in this week's sales.

"We will keep witnessing new records being broken,'' said Michael Frahm, a contemporary art adviser at the London-based Frahm Ltd.

"The demand for seminal works by historical important artists is truly unquestionable.
"This is the ultimate trophy hunting."