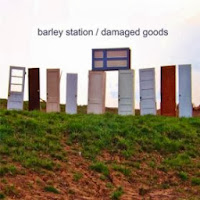 Since we covered – and enjoyed - Barley Station’s debut album back in early 2012, we’ve been keeping an eye on their progress and regularly checking their website for news. We were pleased, though not surprised to hear that they’d been nominated for a bunch of awards by the Artists In Music organization, have been featured in various magazines and papers, and got to play their songs on radio and television. Fronted by Randy Wayne Belt and Brian Olen Kious, who both write, sing and play things with strings, the Missouri-based quartet have now followed up their debut with a second album, and where “After All” got their foot in the door, “Damaged Goods” should see them push on through.

I think it’s fair to say that their new recordings are a little more sophisticated than previous efforts. They retain a rustic, wholesome edge to whatever they do, but they seem more comfortable and confident in the studio these days, and “Damaged Goods” enjoys a variety of sounds and styles - without ever surrendering their artistic vision. Here they begin with the album’s title track, a clever lyric about love, honesty and human failings, and assembled in a manner that brings to mind both Ryan Adams and 10cc. “Medusa” rocks up on Stonesy harmonies, before settling in to a rollicking alt. country riff and a verse / chorus arrangement that sticks around, and “10 Nights” is a classy Southern rock-style ballad, with plenty of country-rock nous, and a dash of blue-eyed soul.
www.barleystation.net
www.facebook.com/barleystation
www.reverbnation.com/barleystation
Barley Station CD Baby Page
Rob F.