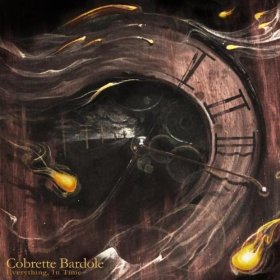 His record: Everything, In Time EP (Independent)

They say: Cobrette Bardole is a human, just like you, who has grown to hunger for musical inspiration and strives to pave a new pathway with his intricately crafted acoustic dreamscapes. Hailing from Central Pennsylvania, Cobrette grew up with a constant exposure to a variety of musical genres and artists that have developed Cobrette's individual style as a musician.

After performing for years in area bands, Cobrette has finally made the jump into the world of solo performance with his debut album “Everything, In Time”. Songs from the album, including “Notion” and “A Second Look” have been described as a “sound that can carry away the listener” (Matt Bacon, 'Two Guys Metal Reviews').

We say: This six-track instrumental introduction to the music of Cobrette Bardole denotes a player with heart and soul, and plenty to say – though happy to let his guitar do the talking. Melodically complex and multifaceted, there’s plenty here to engage the ears, transport the listener to new moods and initiate a series of positive emotional responses.

Mostly calming and reassuring – though there are more strident moments – “Everything, In Time” will appeal to those keen to wind down at the conclusion of a stressful day, and fans of the musicianship of Michael Chapman and John Martyn will be especially thrilled.