Review: The Memory Band - On The Chalk (Our Navigation of the Line of the Downs) 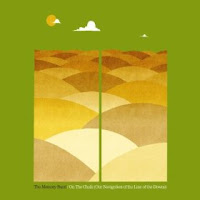 The Memory Band is folk collective led by Stephen Cracknell, which, since 2004, has included a myriad of musicians from a wide spectrum, including Al Doyle, Adem, Liam Bailey, Jenny McCormick, Jess Roberts and members of Simian, Black Ghosts, The Accidental, Lamb and Rocketnumbernine.

This fourth album, as its title makes apparent, is a musical travelogue tracing the historical path of England’s oldest road.  The Harrow Way (known as the Harroway, the Hoary Way or Heargway - the road to the shrine) is the western part of the lost, Old Way, the section that rises to Stonehenge before descending into the West Country.

Opening track “The Wearing of the Horns” reveals that the intention is modern folk music, with a montage of sounds and spoken word samples joined by funereal drum and a more traditional vocal. The tunes project the sense of natural beauty encountered as the journey along the road reveals itself, and conjure the spirit of place, but with a yearning sense of loss.

It’s the spoken word samples that provide a large chunk of the narrative, from “that’s what’ll happen to all you people that haven’t accepted Jesus Christ” / “you’ll burn” contained in “The Wearing of the Horns” through  “…from then on it all changed” heard in “What Blood Is This”, and the many snippets of tales of past pleasures and practices add heaps of nostalgia.

Although indebted to modern technology use of samples and digital drones) the subject matter and overall tone (and as memory can only recall the past) is one that side steps the twenty-first century. Being a band that tours performing Paul Giovanni's soundtrack to The Wickerman, it’s no surprise that there’s a certain pagan influence running through the record.

“On The Chalk” is a thoughtful distillation of reflections on the distant past and alludes to where we as are now.  It accepts that change is inevitable yet opens debate about whether we are in a better place.
www.thememoryband.com
www.staticcaravan.org
Willsk