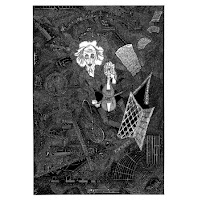 Emerging from the same ‘80s anarcho-punk scene as Crass, Conflict and Poison Girls, Rudimentary Peni, a trio led by Nick Blinko on guitar and vocal duties, were noted for their hard delivery and witty, but often strange and macabre lyrics. The first two of a planned re-issue series are “Cacophony” (1983) and “Pope Adrian 37th Psychristiatric” (1995).

In chronological order rather than re-issue order:


Their second album, “Cacophony” was proclaimed by the band as a sonic tribute to seminal horror author H. P. Lovecraft. Cramming 30 tracks into its 42 minutes, it can be stylistically linked to both British and American hardcore and thrash scenes. To the caustic backdrop, Blinko’s delivery changes frequently, opting for dark Beefheart-like utterances (“The Only Child”), speaking in tongues, reeling out tongue twisters, yawping rabid chaos, chanting mixed up mumbo jumbo or reverberating falsetto (“Dream City”).

Learning that Blinko was diagnosed with a schizoaffective disorder goes some way to explain the above swings, and as a point of note, Blinko creates the disturbing pen-and–ink drawings used on their record sleeves when he chooses not to take his prescribed medication.

It was this schizoaffective disorder that had seen Blinko admitted to psychiatric hospitals and the re-issued “Pope Adrian 37th Psychristiatric” (from 1995) is rumored to have been written during one such residency.

The concept of the album was that delusional Blinko thought he was in fact Pope Adrian 37th (an allusion to Pope Adrian IV, the only former English Pope, from 1154-9, who was also a former habitant of Abbots Langley, where Blinko lived).

“Pope Adrian 37th Psychristiatric” may open up the madness/genius debate, depending on your tastes, but I couldn’t help but be reminded of the opening line of Allen Ginsberg’s Howl, “I saw the best minds of my generation destroyed by madness”.
www.southern.com
Willsk