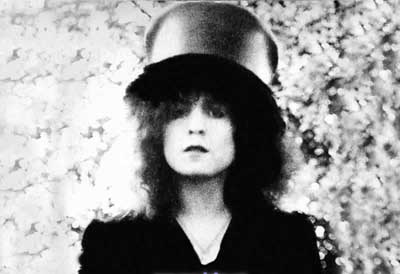 Rolan Seymour Feld filed a court case in Los Angeles against Westminster Music Limited, claiming he is the sole owner of the rocker's hits including Get It On and Jeepster.

He alleges the company did not renew its contract to use Bolan's songs.

Bolan, whose real name was Mark Feld, died in a car accident in 1977.

He formed the rock band T Rex in 1967, gaining success in the 1970s with hits such as 20th Century Boy and Children of the Revolution.

In the court documents filed last week, Feld, who was a toddler when his father died, claimed Bolan transferred copyright to Westminster for one year in a document signed in October 1968.

He alleges the company "never timely" provided his father with written notice that it wished to extend the term, making him - as Bolan's only heir - the sole owner and administrator of his father's songs in the US.

The general terms of copyright in the US is 95 years from publication.

However, for musical works written before 1978, the term is divided into an initial term of 28 years followed by an extended or renewal term lasting an additional 67 years.

Rights to the latter term belong to the living author unless he or she has entered into an agreement transferring those rights.

When an author dies during the initial term, extended rights automatically belong to the author's heirs.
In court documents, lawyers claim Mr Feld "has been damaged in an amount that is not as yet fully ascertained but which Plaintiff [Feld] believes exceeds $2,000,000".

London-based Westminster Music Limited changed its name from Essex Music International Limited in 1981, but is understood to still be trading under that name in the US.

So far the publisher has not made any comment.