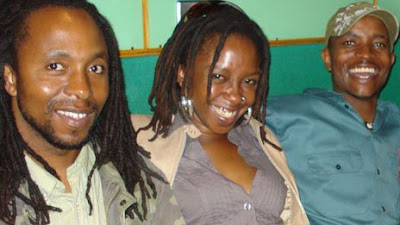 Chiwoniso, pictured here with her band in 2008, was the daughter of
famous musician Dumisani Maraire

Chiwoniso's album Ancient Voices made her a star of the World Music scene in the 1990s.

She played the mbira, or thumb piano, which only men were traditionally supposed to play in Zimbabwe.

She died of suspected pneumonia, just a year after the death of her ex-husband, Andy Brown, also a prominent musician. The pair leave two children.

Chiwoniso was the daughter of renowned Zimbabwean mbira player Dumisani Maraire, who taught at the University of Zimbabwe.

She was born in the US in 1976, before moving back to Zimbabwe at the age of seven.