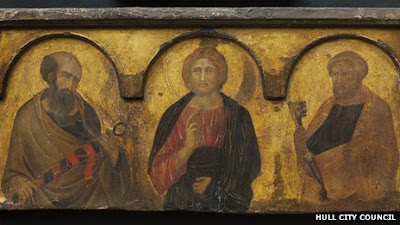 An art gallery has bought a 14th Century masterpiece for £1.6m in a deal described as its "most significant" in more than 50 years.

The acquisition was jointly funded by the Ferens Endowment Fund, the Heritage Lottery Fund and Art Fund.

Curator Kirsten Simister said it would add "depth and quality" to the gallery.

The gold-decorated wooden panel shows Christ with St Paul, on the left, holding a scabbard, and St Peter, on the right, clutching a key.

Painted in about 1320, the artwork was bought after the culture secretary put a temporary export bar in place to allow a buyer to raise the funds needed to keep it in the UK.

Valued at £5m it was bought via a private treaty sale for a significantly reduced price in memory of former gallery director John Bradshaw.

It will join the gallery's permanent collection in 2014 after undergoing conservation treatment.

Ms Simister said: "During my time at the Ferens I have been looking for a major purchase to honour John Bradshaw's memory but did not imagine in my wildest dreams that I would find anything as exciting as the Lorenzetti."

Italian art expert Dr Caroline Campbell, from the National Gallery, in London, said Lorenzetti was "an artist ahead of his time" and described his ability to portray "emotional engagement" between figures as "unparalleled in 14th Century Italian art".

The purchase comes a month after Hull was named as one of four cities shortlisted for to become the UK City of Culture 2017, alongside Dundee, Leicester and Swansea.