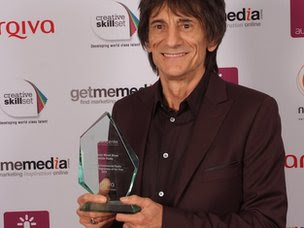 Rolling Stones guitarist Ronnie Wood has been honoured for his Absolute Radio show for a third successive year at the Arqiva Commercial Radio awards.

The rocker, fresh from the Stones' headline slot at Glastonbury, picked up specialist programme of the year. He has hosted the show since 2010.

Talk station LBC won four prizes including station of the year and presenter of the year for Iain Dale.

The awards are organised by commercial radio's industry body, RadioCentre.

Kiss Breakfast with Rickie, Melvin and Charlie was named breakfast show of the year for more than two million listeners.

While Metro Radio's Steve and Karen picked up the breakfast show and presenter of the year awards awards for stations with fewer than two million listeners.

Metro Radio also won station of the year for 500,000 to two million listeners, with Isle of Wight Radio winning the same prize for less than 500,000 listeners.

Coldplay won the PPL (Phonographic Performance Limited ) award for most played UK artist on commercial radio - won in 2012 by Adele.

The awards also celebrated commercial radio's 40 year history by naming 40 people who have made a "significant contribution to the growth and success of the industry".

"The Roll of Honour recognises an outstanding collection of individuals - the 40 men and women who tell the story of our sector from its start-up 40 years ago as Independent Local Radio through to the modern commercial radio sector we know today," RadioCentre chief executive Andrew Harrison said.