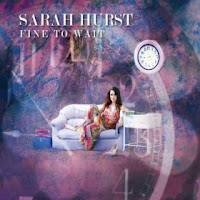 Dallas based singer-songwriter Sarah Hurst is something of a find. Her debut album can loosely be described as folk-rock, but there’s a lot happening on “Fine To Wait”, including a distinct accessibility that borders on pop, and opens her album up to a potentially huge audience. Not that folk-rock’s a particularly limiting genre to inhabit at the moment, as I’m sure various Mumfords and Fleet Foxes would undoubtedly testify. Pleasingly, Hurst appears to be taking her cues from altogether different sources as those bands, ones where the song takes centre stage and ambitious instrumentation and arrangements are the norm.

Recorded with a hungry young band, “Fine To Wait” tingles with energy, as strings and keyboards augment traditional folk and rock instruments - with Hurst’s voice and songs providing the heart and soul of the recording. It flows beautifully, too, and should really be listened to in one sitting, though a handful of tracks certainly standout. The collection begins with “The Valiant”, a rhythmically elastic journey into love and war, with more than enough pop nous displayed for radio to support. “Why Even Start” is just as approachable, with an epic quality that ebbs and flows in much the same way All About Eve’s better songs used to, when they were at their peak.

“Hotel Man” is joyous, upbeat and fun, and relatively unadorned as acoustic guitar takes much of the strain - and the jazzy “Crying Out Loud” reveals Hurst’s talent for a narrative, and her band take a subtle step back to leave ample room for the story to unfold.
www.facebook.com/sarahhurstmusic
www.sarahhurst.bandcamp.com
Sarah Hurst's YouTube Channel
Sarah Hurst CD Baby Page
Tony S.