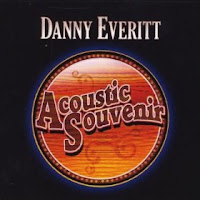 Texas singer-songwriter Danny Everitt began his professional music career in the ‘70s when, while still a university student, his band signed a recording contract with Dallas based Pompeii Records. Graduation brought a move to Nashville and employment as a staff songwriter for a publishing company, and he released his debut solo album in 1981. A collaboration with Eric Burdon brought hits, and a host of major artists covered his most popular song “Love Is For All Times”. Family commitments put his performing career on a back burner, but he returned to the fray in 2007 with the acclaimed “Cold Wind Cold Rain” and now, some six years later, he’s followed it up with his brand new record “Acoustic Souvenir”.

Listening to the ten-track collection, it’s a shame he doesn’t acquaint himself with the studio a little more regularly. His name is on all but one track – a cover of Marty Robbins’ “Devil Woman” – and his lived-in, weathered voice has all the familiar qualities of an old friend, even if you’re hearing it for the first time. Beginning with “Sunset Highway”, its arrangement and presentation sits in the space between Guy Clark and Butch Hancock’s finer records, and contemplates love and the passing of time; a fine start. “Old Man On the Pier” drips evocative imagery and Everitt’s vocal nestles in closely to the narrative, and his Texas troubadour credentials are confirmed on “The Ballad of Aubrey Call”, where the protagonist is subject to an amiable litany of myth and conjecture, but the happy ending seems true enough.
www.dannyeveritt.net
www.facebook.com/danny.everitt
www.reverbnation.com/dannyeveritt
Phil S.