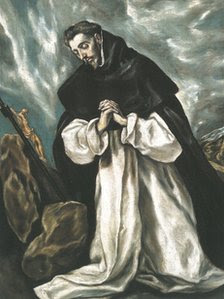 A painting by El Greco, appearing at auction for the first time, has fetched £9.15 million at an Old Masters sale at Sotheby's, in London.

St Dominic In Prayer, painted in the artist's hometown of Toledo in the seventeenth century, set a record price at auction for the Spanish painter.

Another El Greco oil painting, Christ on the Cross, sold for £3.4m.

Dutch artist Rachel Ruysch set a record for a female Old Master at auction, fetching £1.65m for a still life.

Titled Still Life of Roses, Tulips, a Sunflower and Other Flowers in a Glass Vase with a Bee, Butterfly and Other Insects upon a Marble Ledge, it had been listed with an estimated price of £1.1m - £1.5m.

Ruysch - the daughter of a botanist, who worked principally in Amsterdam, but also as court painter in Dusseldorf in the early 1700s - is famed for her intricate still-life images of flowers.

"The greatest Old Master paintings have a timeless quality that transcends their era and gives them a relevance to audiences today, as tonight's global bidding and record result for El Greco attest," said Sotheby's Alex Bell.

"We're now firmly in a new era, where clients from new markets are collecting Old Masters in new ways."

More than 40% of the lots sold achieved prices above their lower estimates, with new records set for eight artists, including Claude-Joseph Vernet and Giandomenico Tiepolo.

The money raised from the sale of El Greco's St Dominic in Prayer, alongside the Tiepolo and another work by Corneille de Lyon - part of the private collection of German industrialist Gustav Rau - raised more than £12m for Unicef, to whom the collection was donated in 2001.