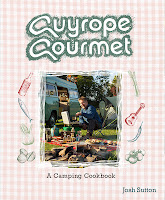 The sun’s out, the forecast is glorious, so it’s off to Wing Hall in Rutland for our first camping expedition of the summer. The site’s as busy as I’ve ever seen it, but the views are unrestricted, on our pitch anyway, and the bell tent goes up in record time. Of course, one of the reasons we’re here is to try out a few recipes from Josh Sutton’s “Guyrope Gourmet” – a camping cookbook – which’ll hopefully cure us of our habit of breaking out the baked beans, sausages and burgers whenever we’re out in the great wide open. There’s really not a tent big enough, or adequately ventilated, for that sort of diet – long-term.

So, lunch first, and we went for the Mushrooms with Parmesan and Pancetta on Toast. The recipe declares that it’ll take “just minutes to prepare”, which is a fairly open-ended statement, but it didn’t take too long at all. We used streaky bacon rather than Pancetta (the book says that’s okay), with chestnut mushrooms, and we picked up a decidedly robust loaf of wholemeal bread before we arrived – which made excellent toast.

What with the sun and the wine, dinner, when the time came, became a leisurely, unhurried affair. Because of the heat, we wanted to avoid keeping fish and meat for long periods in the (not so) cool box, so we brought the ingredients for Linguini Salad with Rocket, Toasted Garlic and Pine Nuts. To be honest, we knew we’d be a little worse for wear at this point of the day, and the one-pot simplicity of this recipe provided much of its appeal. And there’s not an awful lot to go wrong; its complex flavours are pretty much the ingredients of an deconstructed pesto (with the rocket taking the place of the basil, and a slither or five of Parmesan on top) and it’s success could be visibly ascertained from the smiling faces and the eagerness to mop out the serving bowl with a slab of bread.

In the morning we like to go for something warm, hearty and simple, so we decided on Eggs in a Mess. It’s basically eggs on toast (or here, in toast) and as any camper will confirm it’s a classic camp breakfast that fulfils all the criteria. Mr. Sutton recommends serving it with a sprinkling of black pepper, which is probably the civilized way of doing things, but he’ll be happy to hear that it works just as well with a big ol’ splodge of tommy ketch, and were polished off considerably quicker than I could make them – and I wasn’t hanging around.

All in all, not a bad book, and plenty of ideas to perk up your campfire munching, though preparation is everything, and you’ll need to know what you want to cook before you get to the site – or have a reasonable size village or town nearby – the majority of site shops wont stock the ingredients you need.
www.punkpublishing.co.uk
www.coolcamping.co.uk
Rob F.