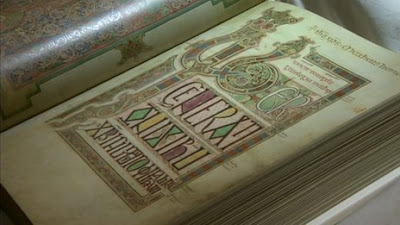 The 1,300-year-old Lindisfarne Gospels have gone on display in the north-east of England for three months.

The major Durham University exhibition offers a rare opportunity to see them outside the British Library in London.

An e-book version of the manuscript with "zoomable" digital pictures has been produced by the library.

Head of history and classics Dr Scot McKendrick said it "extends the reach and accessibility" of the Gospels and hoped it would be "very inspiring."

"It's one of the great frustrations of exhibiting books - we all know there is lots more wonder beyond that one opening that you see," he said.

The exhibition will also display the jewelled cross, travelling altar and sapphire ring found in St Cuthbert's coffin with loans from other collections including The Viking Raiders' Stone and items from the Staffordshire Hoard.

"It's now, of course, an unstoppable train." 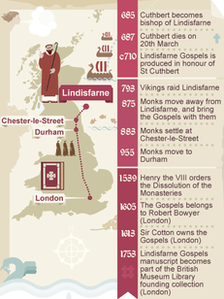 The three-month programme of events will feature exhibitions, performances, concerts, pilgrimages and retreats.

Programme director Keith Bartlett said: "What we wanted to do was make it more than just a book in a box in Durham. It's about the whole story of the making and it's meaning."

The manuscript, created by Eadfrith, Bishop of Lindisfarne in honour of St Cuthbert, was last in the region in 2000 and there has been a long-running campaign to keep them permanently.

"We now have the best facilities, world class facilities, in Durham for exhibiting anything, not just the Lindisfarne Gospels, so we could bring in all sorts of things like the Dead Sea Scrolls for example," he said.