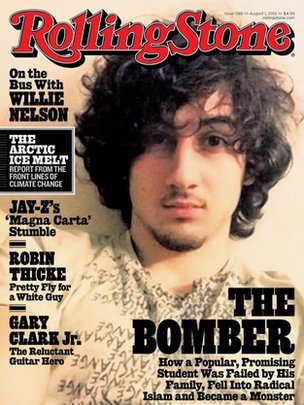 The magazine said a profile of Mr Tsarnaev suited its "commitment to serious and thoughtful coverage".

But the mayor of Boston said the publication's cover "rewards a terrorist with celebrity treatment".

A number of US retail chains have announced they will not stock the edition.

Mr Tsarnaev, 19, pleaded not guilty last week to all charges in connection with the 15 April bombings, which killed three people, including an eight-year-old boy.

In a statement appended to the top of the story, the magazine's editors said on Wednesday their "hearts go out to the victims of the Boston Marathon bombing".

"The cover story we are publishing this week falls within the traditions of journalism and Rolling Stone's long-standing commitment to serious and thoughtful coverage of the most important political and cultural issues of our day," it said.

It added that many of its readers are in the same age group as the bombing suspect, and it was important for the publication to explore the issue.

But two Massachusetts-based convenience store chains, Rockland and Tedeschi Food Shops, as well as Cumberland Farms, said on Wednesday they would not stock the edition.

Boston Mayor Thomas Menino said on Wednesday the Rolling Stone was "ill-conceived, at best, and reaffirms a terrible message that destruction gains fame for killers and their 'causes'".

"Rolling Stone has marketed Tsarnaev as a hero, a misunderstood teen, a product of two incompatible cultures," he said in a statement.

"He is not. He is a coward and a murderer who is appropriately facing the death penalty for his crimes."

Some likened the picture of the suspect, which he posted online himself, to an old Rolling Stone cover featuring Jim Morrison, lead singer of The Doors.

"Rolling Stone you should be ashamed," the band tweeted. "How about one of the courageous victims on your cover instead of this loser scum bag!"